The creation of the SR100 rocket stove was inspired by the courage of those involved in the 2016 effort at Standing Rock 2016 to safeguard the purity of our water. The purpose of the SR100 rocket stove is to provide continuous heat to keep people warm in their homes, to heat greenhouses and workspaces, and provide hot water, in winters that last up to six months with temperatures down to minus 17 degrees.

During the time of the Standing Rock effort I heard on the news that it was going to be 17 degrees below zero at Standing Rock. I felt so concerned for the people that they would be in this freezing cold weather and it would be so hard for them to survive. When I saw Larry the next time I said, Larry, you and I have been designing stoves for over ten years but we still have not designed a stove that I could send to Standing Rock. I said I wanted to design a stove that would deliver 100.000 btu per hour for 24 hours a day and burn continuously for six months without failure. How would you design this stove, Larry?

The SR100 Rocket Stove is capable of producing 100,000 btu of heat per hour 24 hours a day, seven days a week, continuously for six months without failure. This size of a rocket stove has been laboratory tested to emit 90% less pollution and use up to 90% less wood (biomass) than an open fire.

The specification was written by, and the working prototype SR100 rocket stove as seen in these videos, was designed and built by John Robert Zielinski, under the mentorship of Dr. Larry Winiarski, ten-year best friend, inventor of the rocket stove, and author of the Ten Principles of Combustion. Nick Moses, formerly of the Instove Corporation, rendered the SR100 design in Autocad and CNC cut and formed the stainless steel exoskeleton to hold the firebricks to create a combustion chamber similar to a forge. 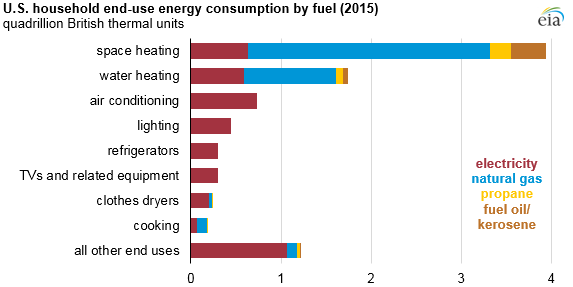 Space heating and water heating were the top two energy-consuming uses in U.S. homes in 2015, according to EIA’s latest Residential Energy Consumption Survey (RECS). Space heating consumption can vary considerably by climate and building characteristics, while variation in water heating consumption is driven primarily by the number of occupants in a home. Households use a variety of fuels for space heating and water heating, which affects these end-use shares of household energy expenditures.
The above video shows the SR100 rocket stove configuration with a 72 inch chimney and a long copper coil inside the chimney directly in contact with the flames. This configuration includes the SR100 Rocket Stove with three 24 inch sections of double layer stainless steel insulated 8 inch ID chimney sections, a coil in the chimney in direct contact with the chimney heat. The coil is made from 60 feet of 3/8 inch ID copper tubing bent into a 48 inch long coil to fit into the chimney. The pump is mounted at the bottom of the tank and pumps the water through high heat PEX tubing up into the top of the coil winding to the bottom of the coil and then straight up to the top of the chimney and then returning to the tank.

This coil configuration was able to heat a 125 gallon tank to 155 degrees F in 2.5 hours and we reproduced this rate of heating water in several different monitored burns. We were able to heat water at a consistent rate of 39,000 btu per hour and we feel we can double this rate with the improvements we are making.

This is the video of the burning SR100 Rocket Stove with long chimney and copper coil. Notice the speed of the flames.

Turn the volume up and listen carefully to the rocket-like sound that the rocket stove is making as it draws air into the combustion chamber directly into the fire and get a kinesthetic feeling for the intensity of the burning process.

This is Dr. Larry Winiarski giving a theoretical presentation on an awesome technology called the “valveless Pulse Jet Engine”.  Close your eyes and focus and follow along in this highly detailed informative presentation.

The Rocket Stove Institute is keen to develop rocket stove technology that will serve groups of people living in a village style such as a yurt, dome, or tiny house village.

All interested parties, people who want to help the world, and lovers of the rocket stove are invited to contact us for more information, apprenticeships, employment, product sales, franchise-like opportunities to make and sell and install SR100 rocket stoves in your community, and to be part of our team.

Sign-up to receive your free copy of "The Ten Commandments of Combustion".